Always the sought after group-wide event, the 2019 RD Beachfest was the kind of “beach get-away” every RDian deserved: a time to be merrily sweat-drenched and sun-kissed all the while invigorating the team spirit and sportsmanship. We attend to our work on a daily basis but we, too, could use some fun once in a while. 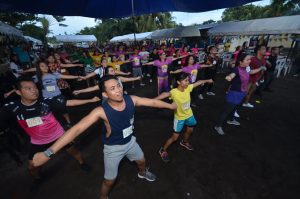 What better way to jumpstart the day than zapping life to tired limbs through Zumba? At the onset of the day-long event, RDians turned up the heat at Dolores Tropicana Extension, way before the sun was up! Dance moves and grooves were showcased as participants from different teams had an early exposition of the energy they have reserved especially for this moment. The dynamic and precise movements of the liveliest individuals outshone all other, bagging points for their respective teams early.

Some call it the most important meal of the day: breakfast. Following the electrifying Zumba, breakfast was served by the respective RD companies. The famished yet extremely livened up RDians joyously took on their meals because well, nothing’s worse than an empty stomach.

As a way of entrusting the activity into God’s almighty hands, Rev. Danilo B. Fredeluces led the opening prayer and as well shared a short preaching to keep everyone from being swayed by the plethora of feelings that might overcome a crowd especially during competitions.

To secure the disciplined conduct of each RDians during the course of the whole event. Mr. Jose A. Peria, GSMWI PMD Head, led the taking of the Oath of Sportsmanship.

Nothing brings out the Pinoy enthusiasm better than the loud cheers of a crowd. Put that in an organized chant and voila: the mood is instantaneously sparked by high spirits. Rumor has it that teams spent days practicing just for the Yell out Loud alone! Rumor must be true because it showed when the showstopper Blue Tuna Hunters (RD Fishing Group) secured the top spot with their booming chants and choreography.

Who says only kids enjoy mascots? 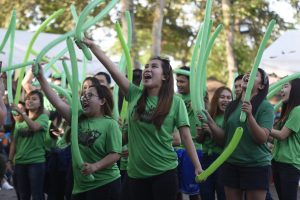 An outroar of excitement and pure entertainment enveloped the atmosphere the moment unnaturally huge and brightly-clothed team ambassadors took control of the activity grounds with their spectacular showmanship and creativity. The audience took the liberty to take snapshots and

record the rare occasion. Immediately after the performance, facilitators and participants alike flocked at the mascots to take a gazillion of selfies. Bumblebee, as it turned out, was the crows – judges’ – favorite.

Company mascots dance-off to the delight of everyone

To allow for the vocal cords to rest, RDian “dancerists” served street angst with their flips, turns, plies, and the occasional pas de beurre Performers gathered “OOH”s and “WHOA”s but the Blue Tuna Hunters (RD Fishing Group) came out on top as the champions of the RDians Dance Battle.

Halfway throughthe program, VIce Chairman and Group EVP-COO Sir Ritche Rivera checked the general mood of the RDians and shared encouraging messages that all boil down to being grateful in all circumstances and recognizing that only by God do all things become possible.

As the popular TV ad went, “I got stinky, I got dirty, but see? I learned!”, the same goes for competitive RDianswho are ready to roll in the dirt, get wet with sea water, and run with zero time to waste. In a matter of seconds, the Tropicana Extension premises became an arena of various cheers: the team players for the Amazing Race were all over the place as they zoom from one station to the next; the representatives for the various Larong Pinoy were all-out in showing their prowess in speed competitions; and the all-time favorite Giant Volleyball turned the beach all the more better.

As the sun was finding its way to the west, the event also reached its end. Winning by a large margin, the overall champion was the Blue Tuna Hunters (RD Fishing Group), followed by the determined Violet Archers (RD Retail and Hotels Group), and finishing as third was the Orange Dockmasters (Gensan Shipyard and Machine Works, Inc.).

It was a long day but it was all worth the time and effort. The memories and camaraderie built among employees of the same company and spanning across fellows working in different subsidiaries are among the simple pleasures in the life of an RDian. Another gem in addition to the topics to be reminisced: be it during lunch breaks, or occasions of get-togethers in the future. 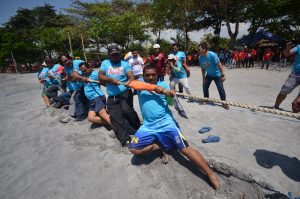