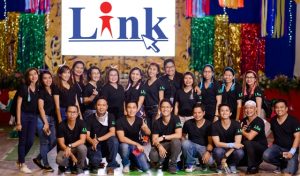 AUGUST 18, 2017 – Net Department Open Court, RDFII Compound, 1st Road, Brgy. Calumpang, GSC. LINK (Leaders in Inspiring and Nurturing Kinship) or RDC EMC (Employee Management Council) was launched to support one of the company’s mission: to promote the well-being and uphold the dignity of its employees.

Spearheaded by the Chairman of Steering Committee, the Modulator himself, Mr. Joemari A. Salinas, introduced the LINK’s Compilers and Linkers of the Committees on Discipline, Productivity, Occupational Safety and Health (OSH), Sports, Wellness and Family Welfare and Programs and Events. Mr. Ritche C. Rivera, RDC-COO led the committees in their oath taking along with a few encouraging remarks for all the employees. He highlighted the use of Kinship which gives impression of bond, fellow feeling, sympathy, rapport, harmony and understanding among each other.

A PICTURE OF CONCEPTION

“I believe that people, all people are connected to each other. In such a way that it is innate and normal among us human beings. I see an invisible bond. The reason why I came to think about the word – LINK originally was derived from the word hyperlink. It represents connection in just a click.” Quoted from LINK’s Modulator, Mr. Joemari Salinas, on his thoughts about how RD Corp came up with this program. Furthermore, he added, “LINK is a paradigm in which people are involved. It connotes relationship, like a friend, like a family. It is like an avenue where we share ideas and thoughts without compromising the interest of the company.”

LINK was formed to increase awareness of the employees of their duties and responsibilities as an integral part of the organization. It is also a communication tool to promote transparency, sense of ownership and employee-management cooperation to create a harmonious working environment and to meet the goal of the company as quoted from RDC EMC Charter. This Charter was composed of five articles (About the Organization, Membership, Meetings of Members, Committees, and Amendments).

The logo is inspired from the computer term “hyperlink” which means a highlighted word or picture in a document that you can click on to go to another place in the same or different document. The symbol of the person signifies relationship between employees and the management. Thus, as a whole, it connotes interconnection of people within the organization or in a simple term, Linking People. The mouse cursor (clicked to trigger the link and go to another place) signifies the Steering Committee whose duty is to be the trigger of RD Corporation to achieve/reach the ultimate goal which is to give employees and the management a harmonious working environment.

A VIEW OF WHAT’S AHEAD

“I see a dynamic body of people flourishing hand in hand together, because I see people here in RD Corp, as if everybody were born to be leaders. I sense that as LINK go further and farther, it is not impossible that it would be a role model to other subsidiaries.” – Mr. Joemari Salinas on how he sees LINK ahead of time.

In conclusion, there’s this story about a flock of doves and their king and his friend mouse. The flock of doves were having their meal when suddenly a net fell on them and a hunter was approaching while carrying a huge club. The king dove instructed them to fly up together carrying the net with them. He said that there was strength in unity. Each dove picked up a portion of the net and together they flew off carrying the net with them. They landed with the king’s friend mouse and he helped them to totally get out from the net eventually. He began to cut the net and one by one all the doves were freed including the dove king. They all thanked the mouse and flew away together, united in their strength. Indeed, as the moral of the story – When you work together, you are stronger.  (Fernaline Joy F. Galopo)