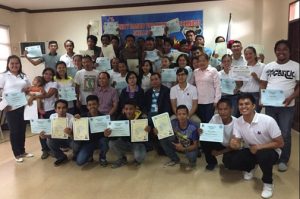 After a series of meetings and consultations to the pilot communities finally the skill training on Massage was held in Barangay Calumpang with 27 learners enrolled composed of Alternative Learning System (ALS) learners and mothers from two neighboring puroks (Cahilsot and Romana). Shielded Metal Arc Welding (SMAW) was also launched in Upper Labay in partnership with BLGU Upper Labay and CSWDO. The skill training was offered to drug surrenderees, out of school youths and non-working fathers. The project was launched through ceremonial signing of partnership pledge of commitment last January 23, 2018.

Massage training sessions were held in one of the classrooms of Romana Elementary School where the ALS learners also occupied an area. Partners from ALS together with RD Foundation collaborated in order to pursue this program which is helpful to non-working mothers and ALS learners to enhance their skills. Massage therapy session started on February 7, 2018 with class schedules every Wednesday and Thursday of the week from 8:00am-11: am. The learners were provided free consumables (massage oil, alcohol etc.) during their trainings.

Out of 27 learners, 11 of them came from ALS learners and 16 are non- working mothers of the community. After the trainings twenty-four (24) of them enthusiastically finished the series of learning sessions and underwent actual demonstrations. Eleven (11) of them decided to take the National Certificate (NC) II Assessment on March 21, 2018 held in Golden State College Assessment Center. Fortunately, one hundred percent (100%) of the takers passed the assessment and competency. They are now entitled for National Certificate II in Massage Therapy.

On the other hand, the SMAW training conducted in Upper Labay was attended by 30 learners (11 of them are drug surrenderees and 19 of them were out of school youths (OSY) and non-working fathers). Fortunately twenty-six (26) of the learners completed the series of trainings, seven (7) were under the program of recovery drug dependents and nineteen (19) composed of OSY and non-working father. Twenty -Five (25) of them took the SMAW -NC II and one hundred percent (100%) passed the assessment. Out of twenty-five of the passers, twenty-three (23) of them came from B’laan tribe, one (1) is Ilonggo and one (1) came from Muslim tribe.

Aside from the skills training, RD Foundation conducted seminar on visioning / goal setting to the learners. RD Foundation believed that more than enhancing the skill of the learners, it is important also to instill in them good values to achieve their goal. Spiritual enrichment was also realized to emphasize to the learners that the attitudes about work and the attitudes towards the people around them at work are a reflection of how well they understand that God is a part of their daily activities.

On June 29, 2018 at 1:00 in the afternoon the first Community Based Technical Vocational Skills Training Recognition Day was held in RD Foundation, Inc. compound. The celebration is to recognize the graduates of SMAW and MT vocational trainings. It was attended by the partners Mr. Richard M. Amparo the Provincial Director of TESDA-Sargen Area, Ms. Melba S. Quinal from DepEd one of the Coordinators of Alternative Learning System, Mr. Julian G. Tagupan- SMAW Instructor and Ms. Verginia Villamor- MT Instructress.